German-born musician NHOAH will be releasing on the 13th of April via R.O.T respectortolerate Records. West Berlin is name of the album and has been highly anticipated following the immense great support of his previous releases ‘Abstellgleis zu Remixen’ and ‘120 Red Skies zu Remixen.’

The techno producer has received immense support and received great reviews from publications such as PopMatters, Clash Mag, Data Transmission, Electronic Groove and Radio 6 Music’s Nemone. With a signature style of hypnotic beats and club-infused melodies – NHOAH can be compared to artists Dominik Eulberg, Rone or Stephan Bodzin.West-Berlin will be available both digitally and in coloured double-vinyl and will embodies club enchanting melodic beats and echoic lyrics. NHOAH created this album from scratch by using various techniques, limited equipment and working on the road. This album showcases his heavy influence by creative producers Conny Plank (Krafwerk, NEU!, Ultravox) Hans-Joachim Roedelius kick in on the production with a multitude of modular synthesizers, overflowing arpeggios and pounding oscillations which cement and encapsulate NHOAH’s style perfectly.“120 Red Skies” is the second track on the album and sets a perfect tone of heavy basslines and spilling chopping synthesizers all under beautifully paced beats. The songs all have a wonderful progressive arrangement with seductively insync lyrics and blended elements. “NO Kohle Oel Erdgas” the album’s fourth song has robotic voices being repeated over a enchanting club beat with high energies and empowering drum-lines.Speaking on the new album NHOAH comments: “I was born in a club; the club was called “West Berlin”. There were the dance-mad, the military refugees, the gays and lesbians who had to escape the pressure elsewhere, and the lateral thinkers and revolutionaries. In this club, West Berlin, bars, discos and dark rooms were open all night – with no closing time. The East Berliners, right outside the door, were not allowed to get in. I was born into this maelstrom and grew up within it, and the club West Berlin left lasting marks on me until its closure.” 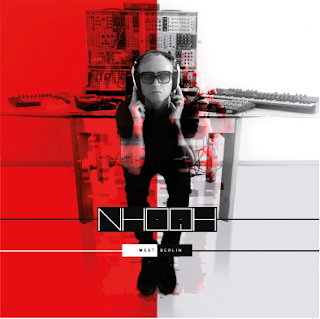 West Berlin will be available via all major digital outlets, download/stream here.