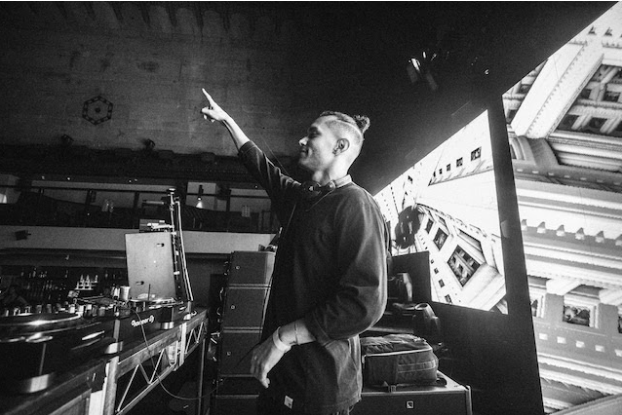 Following up on his two-track EP, “The Oracle”, Los Angeles based producer Anakim unleashes “Poseidon’s Revenge” – a dark, techno-driven project embroidered with piercing synths, heavy basslines and a sinister ambience. Each track, standing at around 7-minutes, carries the intergalactic underground sounds that have become a signature trademark of Anakim’s sound.

Regarding the release, Anakim explains, “The Poseidon’s Revenge” EP is an important EP for me because it signified a major creative shift in my sound. I held on to it for a bit because I wanted it to find the perfect home. With divine timing, a friend of mine let me know Desert Hearts Black was being formed. Marbs and Evan Casey were two people I already had immense respect for. When they reached out to me with as much enthusiasm for the EP as I had in making it, I knew it was meant to be. I couldn’t be happier joining the DHB family.”

Poised at the centre of Los Angeles’ thriving music scene, Anakim is known for his haunting, dark techno and progressive house tracks that bring life to the underground culture. Having already released tracks on major labels such as Mau5trap, Insomniac Records, EIN2 and Krafted Underground to name a few, Anakim is climbing the ladder to becoming one of the top underground artists in the scene. With a rather impressive 2019, the LA-based DJ was named one of DJ Mag’s ‘Bubblin’ artists to watch and opened for Testpilot, LeYouth and Ilario Alicante throughout Los Angeles’ premiere nightclubs and underground warehouses.

Desert Hearts Black, a sub-label of Desert Hearts, is a new imprint that focuses on heavier sounds and musical exploration. Started by Desert Hearts founder Marbs and fellow venturer into the deeper and darker avenues of electronic music, Evan Casey, the label is heavily geared towards house and techno. Desert Hearts Black opens its doors to artists who are willing to push the boundaries of the dance music landscape.

The dark techno beats that make “Poseidon’s Revenge” are available on all streaming platforms Friday, January 31.